ALL NEW LSAT- FLEX: Remote Proctoring begins in MAY 2020 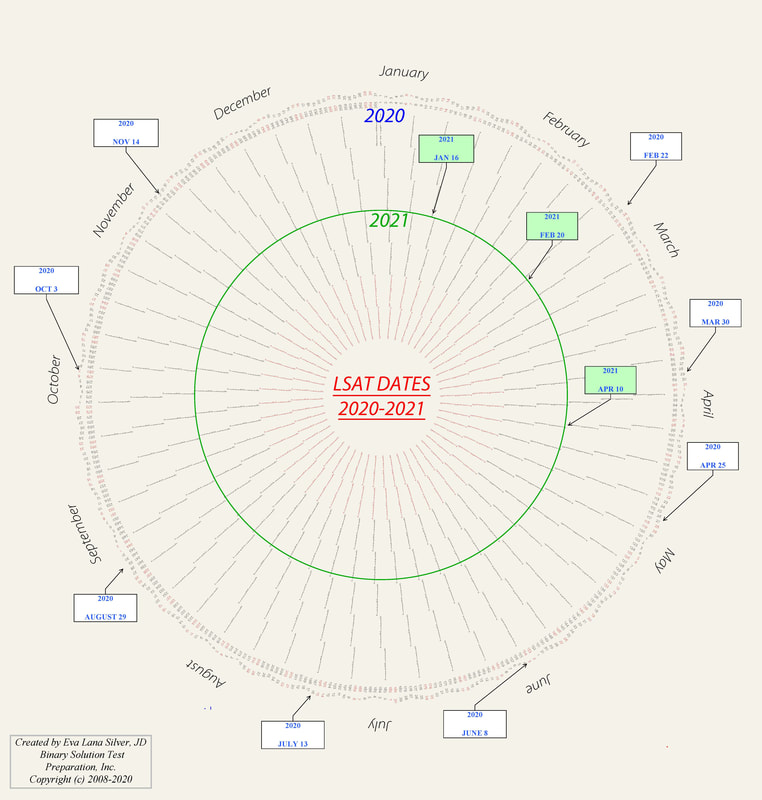 4/7/20: LSAT-Flex Introduced
LSAT IS NOW DIGITAL & WILL BE PROCTORED REMOTELY DUE TO COVID- 19
Prior to the pandemic, LSAC had announced eight (8)  new LSAT dates  (through April 10, 2021), which are depicted in the Circular Annual Calendar featured on this page.
On April 7, 2020,  LSAC  cancelled the April LSAT and offered the May 18 LSAT instead.  In addition, the June LSAT was delayed and is being offered during the week of June 14.
​
CHOOSING AN LSAT:
How LSAT Dates Correspond to Admissions Cycles
LSAC conceptualizes the year as an academic one which begins in the summer (after May term ends) and ends the following May.  Hence the "first" exam of any admissions cycle is given in June, followed by several Fall LSATs (always the most popular tests), the Overwintering LSATs, and a final LSAT in April.
The 2020-2021 Admissions Cycle (for candidates entering law school in August 2021) is comprised of EIGHT (8) dates:
2020 LSAT Dates:
June 14; July 13; August 29;
October 3; November 14
2021 LSAT Dates:
January 16; February 20; April 10
**NOTE:  All law schools will accept scores from LSATs administered on or before January, while only some law schools will accept LSAT scores from later LSAT dates in admissions cycle.​  CLICK HERE FOR SPHERICAL CALENDAR OF LSAT DATES